Books & Bites: Lunch and Book Reading with Michael A. Almond 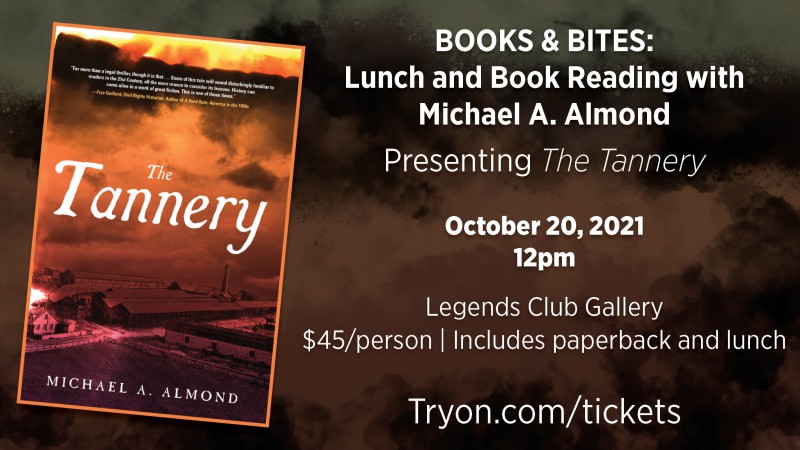 Books and Bites:
Lunch and Book Reading with Michael A. Almond
Presenting The Tannery

July 5, 1900, Wilkes County, North Carolina: The beautiful young daughter of tannery owner Jakob Schumann is found dead on the north bank of the Yadkin River, brutally beaten, a skinning knife in her chest.

Who killed Rachel Schumann? And why? Ambitious Wilkes prosecutor Vincent Taliaferro has arrested Virgil Wade, a mixed-race boy, and is convinced the case is open and shut. But local lawyer Ben Waterman is not so sure. Ben’s investigation uncovers evidence that undermines the prosecutor’s case and points in an entirely different direction. But can he prove it? Can he convince an all-White, all-male jury of Virgil’s innocence?

The Tannery transports readers to the turbulent world of the post-Reconstruction South. Reflecting issues prominent in today’s headlines, themes of Black voter suppression and intimidation, the violence and depravity of vigilante “justice,” and the rise of Jim Crow drive the narrative to its dramatic and surprising conclusion.

Michael A. Almond, a retired attorney, was raised in the small town of Pilot Mountain in the Piedmont foothills of North Carolina. He received his undergraduate and law degrees from the University of North Carolina at Chapel Hill (Morehead Scholar; Morehead Law Fellow), and was a Fulbright Scholar in political science at the University of Mannheim, Germany. During his years as an international business lawyer, he was awarded the prestigious Order of Merit of the Federal Republic of Germany for “outstanding commitment in fostering relations between the United States and the Federal Republic of Germany.” An avid reader and student of Southern history and literature, he currently lives on a farm with his wife, Helen Ruth, in the beautiful Blue Ridge Mountains of North Carolina. The Tannery is his debut novel.
Praise for The Tannery

“It might not seem fair to compare The Tannery to [Harper] Lee’s To Kill a Mockingbird since Lee’s novel is recognized as one of the most important novels in the history of Southern literature, but The Tannery stands up to the comparison. . . . Michael has created a riveting novel that combines the excitement of a legal thriller with the complexities of a well-researched work of historical fiction. Michael’s depiction of North Carolina’s bigoted past is unflinching and disturbing, but his portrait of his native state is not entirely negative. His story has its bigots, but it also has its heroes.”