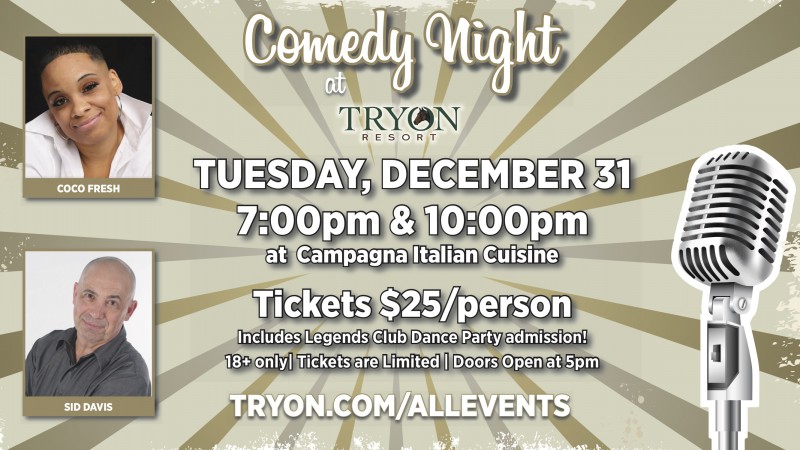 CoCo Fresh and Sid Davis are serving up TWO shows on December 31 for the ultimate way to close out the year! The doors open at 5pm, and attendees can enjoy a full bar and menu available.

Join us in Campagna Italian Cuisine at 7pm or 10pm for laughs and gain admission to the Legends Club NYE Dance Party afterwards for FREE! Comedian bios below.

Tickets are LIMITED – get yours before they’re gone!

Tickets: $25/person available here.
18+ only. Admission is per show with 7pm and 10pm shows available. A wristband to the Legends Club (21+ only) is also included with purchase.

Courtney Tyson, also known as Coco Fresh, is a comedian from Charlotte, NC, former radio personality of Club Vibrations Saturday Night Live Broadcast on Charlotte’s Old School 105.3FM, and entertainment reporter of The Hollywood Scoreboard ESPN980 The Morning Man Cave. Currently, she is touring with J Anthony Brown, Chris Paul and Huggy Lowdown of The Tom Joyner Morning Show. This little lady’s stories of her childhood nightmares to strip club memoirs will tickle your funny bone and give you an ab exercise. She is no stranger to television and has appeared as a dancer on BET’s Born to Dance, 106 and Park, MTV’s The Wade Robson Project, and CMT’s The Ultimate Coyote. She is also a former dancer for the WNBA and NBA.

Despite his delayed entry in the comedy business to raise his family, Sid Davis‘ arrival caught the attention of several A-list comics.  His first break, a video for ComedyTime TV shot up to the website’s highest ranking spot for over twelve weeks. In 2012, Sid was voted Best in Fest by the audiences at the San Luis Obispo Comedy Festival.  He was voted Best in Fest again in 2013; and AGAIN 2014! In 2014, the legendary Joan Rivers took notice of Sid while seeking an opening act.  20 seconds into watching his audition video, Joan declared, “Get him! He’s absolutely terrific!” After you see his one-of-a-kind show, you will agree!